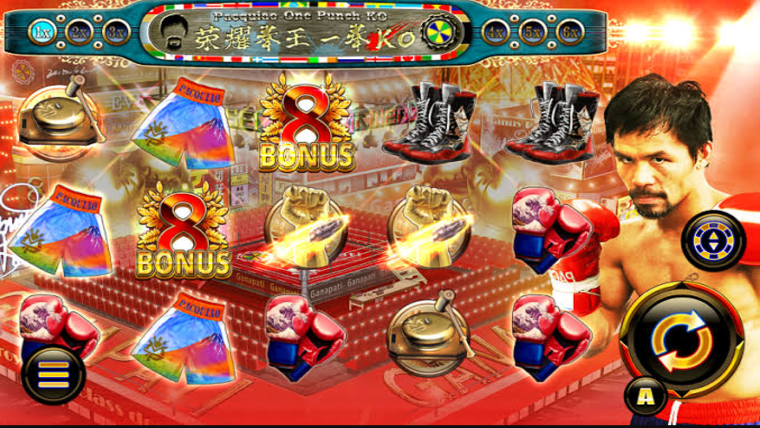 The five reels of the Pacquiao One Punch KO slots game feature 25 paylines and will take a form of 3×5 cascading slot. Its primary theme is none other than living boxing legend, Manny Pacquiao in action stands to the right of the reels, along with symbols linked to his career and achievements manage the screen of the game.

The game features cascading reels, multipliers, wild symbols, and bonus spin. Land a winning combination that will produce a win will disappear from the reels. The symbols above cascade down to replace those vanish, with new symbols filling empty spaces that trigger another cascade.

Aside from its excellent features, it has the lucky number eight commemorating Pacquiao’s eight titles, used as a bonus symbol. Three or more scatter symbols that appear anywhere on the reels activate 10 bonus spins, which are triggered if three or more scatters appear during Bonus Spins Feature. Throughout this bonus round, win multipliers start at 3x, increasing to 8x if you land a long full series of symbol cascades.

The distinctly colored symbols include gloves, boots, shorts, a bell, and a clenched fist. The MP logo of the slot game pays 16x your stake when it fills a payline. Having three or more championship belt symbols on a line pay 1x, 16x, and up to 400x your stake.

Juliet Adelstein, CEO of Ganapati Europe Holding and Ganapati Malta said,” This opportunity is extremely exciting for us as it represents Ganapati’s considerable growth within the industry. We’re delighted to be involved in this project with the octuple champion Manny Pacquiao – a true global superstar. It is wonderful to know the extent to which Ganapati is now being recognized in the industry.”

CLO of Ganapati PLC and Ganapati Malta, Hayato Terai also added, “Manny Pacquiao has defeated countless powerful players in the past – no matter how strong his opponent, he always faces them head-on and without fear. This mental strength of his can be seen not only his role as a pro-boxer, but also as a politician and future leader of the Philippines. It is an honour to be able to produce his official game.”

Proceeds from the game will go to the Manny Pacquiao Foundation, helping children’s education in the Philippines!

So what are you waiting for? Prepare to be knocked out by a Pacquiao One Punch KO slot game at Betrnk!