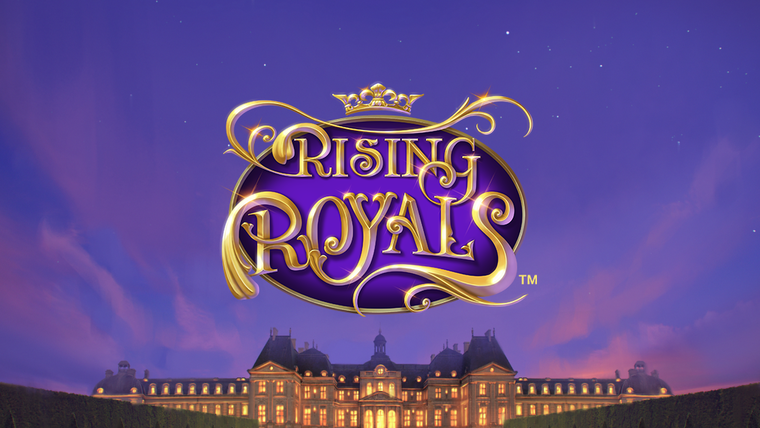 This new slot is a five-reel, 20 payline with fortune and elegance. Loaded with interesting features and a full cast of French royals, this title can offer majestic rewards. Players are welcomed to a grand ball, complete with hanging chandeliers, flowers and all the decadence expected from such a royal affair greet guests. The royal family is represented by the dashing King, Queen, and their handsome young prince. Together with the Rising Royals logo consist of the highest paying symbols.

The slot’s design has an elegant and lavish feel to it. The purple reel is covered with beautiful chandeliers, gradually brocaded dresses, powdered wigs, and royal balls.

During gameplay, there are two existing features work in tandem and are triggered by each other. Winning on royals or the logo starts the Symbol Lock Re-spin feature, the winning nobles lock into place as the reels respin in hope of landing more of the same symbol. This process repeats until no more qualifying symbols make an appearance.

The second feature is the Chandelier Upgrade Meter, keep your eye to place at either side of the reels as an ornate chandelier, will light up every time a symbol gets locked in. However, after profitably landing nobles on three back-to-back respins, it triggers the Symbol Upgrade feature, transforming the royal to the next highest paying symbol.

With the combining powers of the Symbol Lock Re-spin and Symbol Upgrade features, the game with a return to player (RTP) of 96.01% offers players a maximum jackpot of 75,000 as they work to satisfy the gold-rimmed grid with Rising Royals.

According to an official release, Director of Global Operations at Microgaming, James Buchanan said, “Just For The Win’s latest creation is an entertaining online slot that is equally rich in both graphics and features. The Symbol Lock Re-spin and Symbol Upgrade combine to add tremendous excitement with players looking for a full grid of the Rising Royals symbol, offering the potential for fantastic wins.”

You can now play this game at betrnk!