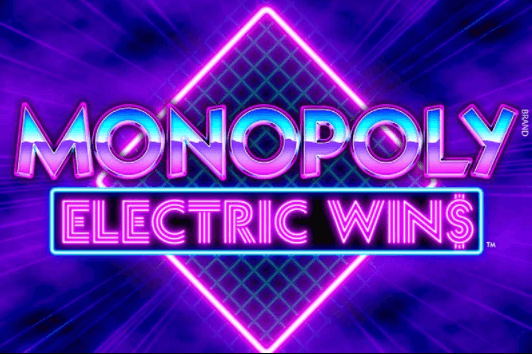 Monopoly Electric Wins is the newest online slot game from Williams Interactive (WMS). It is part of the Scientific Gaming family, which also controls Bally Technologies and Shuffle Master.

The game was released in October 2020 to be the best Monopoly-themed game on the market. Developers have gone a step further with this one and skillfully mix classic monopoly with a video slot to create unique and engaging gameplay.

Monopoly Electric Wins features a 6×3 set of reels with 729 ways to win and an all-ways pay system where the actions take place. Loading the game will take players to a kind of virtual space filled with flashy neon lights, plus the overall design is minimalistic and attractive. The soundtrack is a monotonous disco track that features a good amount of synthesizer sound, a continuous rhythm on the high-hat, and a funky baseline.

The game’s low-paying symbols consist of classic Monopolies counter pieces such as a top hat, racing cars, dinosaurs, and ships. They all have the same value and pay a maximum of £30 or double your stake for six of a kind. Moreover, there are six high-paying symbols in the game including gold rings, wardens, chests, Mr. Monopoly, and the game logo. The latter is the most valuable and pay £100 for six of a kind, while the other high paying symbols reward a maximum of £50.

The Electric Light Bulb acts as a scatter symbol, and there is also a Neon Wild symbol that can replace any regular symbols on the reels. However, the Wild only appears on reels one to five.

In the base game, there is a monopoly board around the reel which is the key to triggering the bonus feature. Besides, players can not only move around the board and receive extras, they can also take advantage of Multipliers and Free Spins.

Each time you make a spin, a pair of dice will be rolled and the counter moves across the monopoly board. Landing on a property segment, it will be purchased, and once you have all properties of the same color, players will be able to add hotels and houses on those sections. This allows players to receive additional cash prizes while throughout Free Spins.

Aside from the property segments, players also can land on the bonus feature segments, which are the following:

The number of free spins will depend on the dice roll. You get between 4 and 16 free spins. However, if your first roll of dice is less than 5, you can re-roll the dice and your result will be added to the first roll.

Monopoly Electric Win stands out from dozens of monopoly-inspired slots thanks to its unique modern design. It is one of the more complex slots, but the gameplay is definitely worth learning. This is the perfect slot if you’ve never been a fan of Monopoly Megaways because the game has more useful features and the free spins are much easier to play.

The Monopoly board has various bonus features to keep you entertained. The maximum payout of 1000x your stake can be achieved by landing some wild multipliers on a payline. Play now at betrnk!