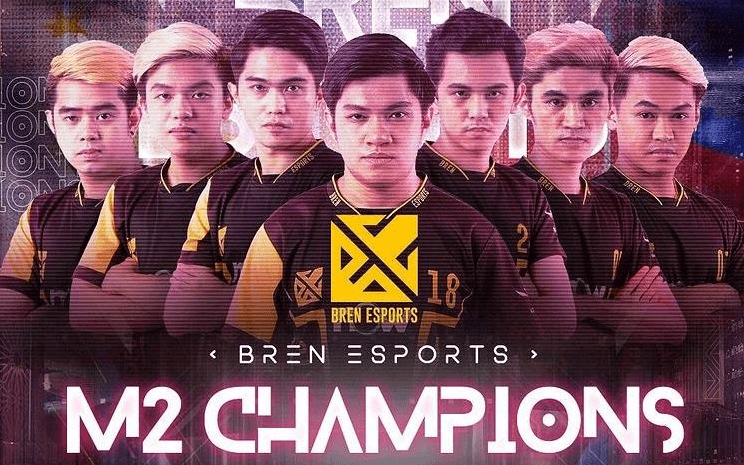 BREN Esports have made their mark in history by being the first Filipino team to win the Mobile Legends: Bang Bang M2 World Championship title, after defeating Myanmar’s Burmese Ghouls in epic seven-game grand finals in Singapore.

After getting knocked down to the lower bracket, BREN Esports had to fight its way facing teams such as 10s Gaming Frost (Japan), Alter Ego (Indonesia), Todak (Malaysia), and RRQ Hoshi (Indonesia) and won the M2 world title on Sunday night at the Shangri-La Hotel in Singapore with a 4-3 win against the Burmese Ghouls.

With their victory, BREN Esports will take home the M2 World Championship plaque, and receive the lion’s share of $140,000 out of the tournament’s $300,000 prize pool. Furthermore, the team will be given a chance to design their championship skin with their own branding for the hero of their choice. The roster is made up of Ribo, Pheww, FlapTzy, Lusty, KarlTzy, and Coach Ducky.

It was an exciting series with the teams going back and forth. BREN Esports was up 2-0 early, but Burmese Ghouls rallied and won their next three games to seize a 3-2 lead. At this point, the Filipino squad fiddled with a selection of heroes to match the lineup being dispatched by Myanmar’s team.

BREN came together and took the next games and the final victory in Game 7 to close out the Ghouls. BREN’s KarlTzy won the Finals Most Valuable Player Award along with a $3,000 bonus to boot.

With a championship within their reach, BREN Esports broke through the Burmese Ghouls base to achieve ultimate victory after 14 minutes of some of the best MLBB games in the history of the game.

The M2 World Championship is held at the Shangri-La Hotel in Singapore and is co-organized by Moonton and Singapore’s Cybersports and Online Gaming Association (SCOGA) with the support of the Singapore Tourism Board (STB). That marks Singapore’s second live sporting event to welcome foreign athletes.