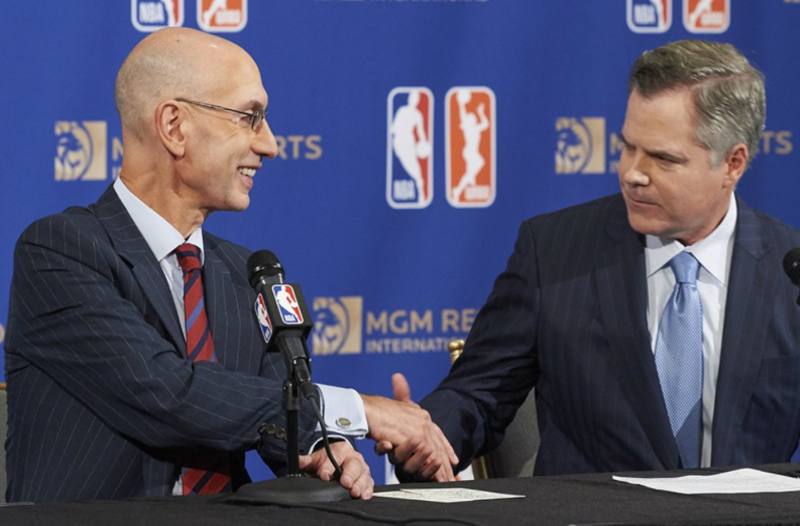 New York and Las Vegas – MGM Resorts International and the National Basketball Association (NBA) announced on Tuesday that the two parties are teaming up to provide real-time content and data services to fans and sports bettors. The agreement makes MGM the official gaming partner for the NBA and WNBA. Definite agreement terms were not disclosed, but ESPN reported that MGM paying $25 million for a three-year contract.

This historic partnership will unite MGM Resorts guests and millions of NBA fans through an innovative collaboration that opens up new and inspiring opportunities to engage with world-class brands and products. This partnership is the first in the NBA with sports betting providers in the United States and the first among MGM Resorts and a major professional sports league.

As part of the partnership, MGM Resorts will use official NBA and WNBA branding and data, on a non-exclusive basis, across MGM Resorts’ land-based and digital sports betting deals in the United States.

NBA Commissioner Adam Silver commented on the partnership,
“As the landscape for sports betting in the US continues to evolve at a rapid pace, MGM Resorts is a proven gaming leader for us to work with on this groundbreaking partnership,”

“Our collaboration will result in the best possible gaming and entertainment experience for consumers through the use of accurate, real-time NBA and WNBA data, and our collective efforts to maintain and enhance the integrity of our games,”

While NBA Commissioner Adam Silver and MGM CEO Jim Murren complimented each other ‘s operations and remained in their respective industries, the details of the partnership specifically means were limited. MGM is the owner of WNBA’s Vegas Aces, a franchised firm that relocated from San Antonio to Sin City for the start of the 2018 season.