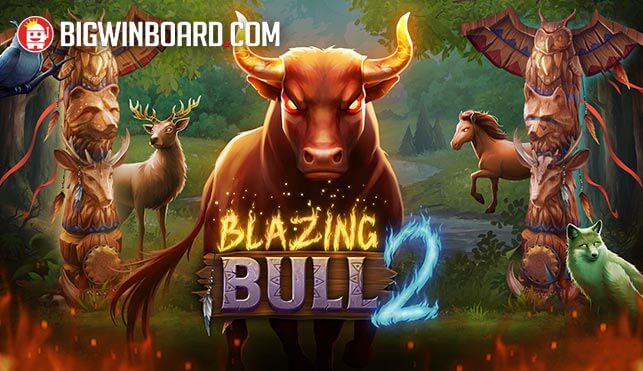 The developer revealed in press release published on Tuesday by European Gaming and Events that its new six-reel video slot is based on its Blazing Bull advance from last year. The sequel offers a range of ‘amazing features’ and the fact that players have the chance to walk away with up to 50x their stake.

Blazing Bull 2 is a high-volatility game with a 96.26% return-to-player ration that is already available to enjoy at a number of online casinos including VegasHero.com, VideoSlots.com, and CasinoCruise.com. The company also explained that the mobile-friendly game offers 4,096 ways to win and uses the K-Boost meter system.

With regards to bonuses, the developer explained that the trademarked K-Split free spins games in Blazing Bull 2 sees a moon-powered mystical energy bolt choose a random symbol to double or triple while its Multiplier Wild engages a sun-fueled energy bolt to randomly choose a multiplier icon for even bigger chances of winning.

According to Kalamba Games, the Blazing Bull 2 video slot also offers players in certain jurisdictions the option of purchasing entry into both of these free spins round through its HyperBonus feature. The developer said that those who pay 51 or 76.4 times their stake will be given 10 or 15 free spins respectively, whereas seven or 15 Multiplier Wild attempts will grant players with 23.8 or 34 times their stake.

“The success of the original game gave us a great platform to build from with Blazing Bull 2 and we’ve taken that red-hot gameplay and cranked it up to offer even bigger potential wins. The feature set is really clever and offers some real high points in play; our mathematicians and entire development team have done a superb job,” Alex Cohen, chief operating officer for Kalamba Games Limited, said.