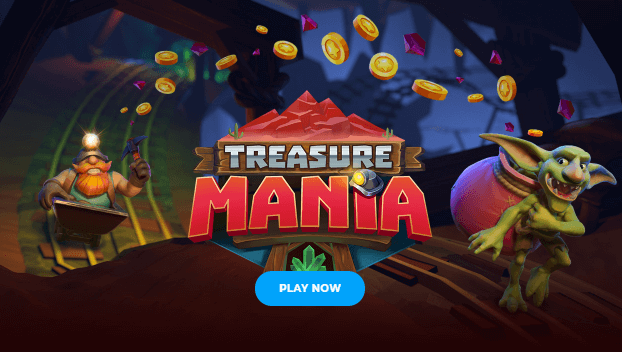 Innovative game developer Evoplay Entertainment, invites players for an epic quest in its latest title, Treasure Mania. Deep in the perilous Badlands of the West, there is a hardworking dwarf named Warf who searches for hidden treasure.

You may help him as you spin the reels, and make sure to search vigorously because, along with a hidden bags of gold, Warf can further discover Wild Trains that will increase player’s winnings by up to x700.

But beware, Warf also has to keep an eye for the mine’s second inhabitants, a jealous and greedy goblin named Roblin, who is out to steal Warf’s hard-earned treasure.

Treasure Mania is a 5×3 reel slot based on the idea of ​​mining for valuable metals. The hunt for the most exciting bounty begins when Warf enters the cave to catch the thieves and get back his mine. En route, he discovers that opening the right doors in the tunnel can produce additional bonuses, including coins, stones, and jewellery.

Set on five train routes which go into a mine, and wagons filled with rocks and metals. Obtain carts with the same type of metal, which will get up to 20 combinations from multiple rows.

This slot offers high-quality graphics and exciting features such as Wild Trains, Bonus Mine, and Mystery Symbols, giving you a chance to win and increase your bet by 1,000 times. Additionally, the slot volatility is moderate to high with an RTP of 96%.

Landing Pink Crystals (mystery symbol) on the reels will launch and reveals any paying symbol.

The first Wild train can only appear on the center reel after any losing spin. This is what happens when you don’t have a mysterious symbol. If there are no wins, additional Wild Train will randomly appear in your reels until you can form some good winning combinations.

The simultaneous appearance of Bonus Dwarf on reels 2 or 4 and Bonus Goblin symbols on the 3rd one activates Bonus Mine Feature.

Travel through the tunnels, and try to catch the Goblin, the reward is 500x your total bet.