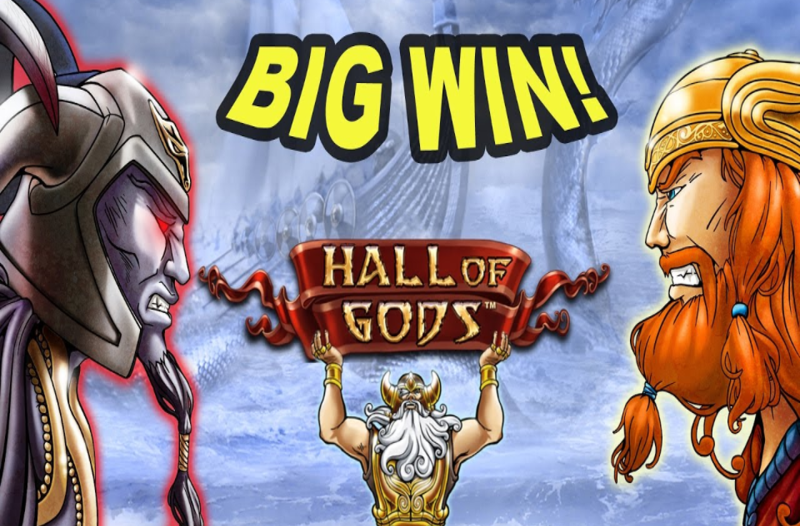 Hall of Gods slot game is an interesting Norse mythology themed game powered by Net Entertainment. Featuring such legends like Thor and Odin, this is a very satisfying game. The godly theme is eventful right from the start. With a dramatic opening of title series packed with lightning bolts and two enraged gods staring intensely on both sides of the screen, you know it will be an exciting journey.

The Hall of the Gods slot game is based on ancient Viking beliefs in Nordic mythology, where you will be taken to Valhalla, where all the almighty gods lived and where no mortals are not allowed. The background is made of a wooden panel and the bottom part of it is covered with clouds. Because the reels are located above, the impression is made that the reels are hovering on the clouds. Behind the symbol, which covers about half of the reels, there is a blue/gray picture of a Viking ship and a giant sea creature emerging from the water. The sound of ocean waves and thunder can be heard all the time, although it is somewhat drowned out by the sound of a spinning reel.

The five highest paying symbols in the game are represented by various gods from Nordic mythology such as Odin, Thor, and Freya. There are also five low paying symbols, which include a chest stuffed with apples, a ring Thor’s mighty hammer, an amulet, and a pickaxe. Furthermore, you will find the Wild symbol in the form of a Midgard Serpent, which can expand to cover an entire reel whenever it can be a part of a winning line and replace for all other symbols, except for the scatter and bonus symbol. The Odin’s two ravens Mumin and Hugin act as a Scatter symbol while the Bonus symbol is represented by Thor’s hammer being hit against a shield.

Hall of Gods is a progressive video slot that offers 5 reels, 3 rows, and 20 paylines. A win is generated when 3, 4, or 5 of the corresponding symbols land on each paylines, starting from the leftmost reel. There is an auto-play option where you can choose among 10 and 1000 auto spins. You can also use the ‘Quick Spin’ mode to play the reels faster.

When you manage to land a Midgard Serpent Wild symbol, it appears on reels 2, 3, and 4 and replaces for all other symbols except for the scatter and bonus features. It will activate the Expanding Wild Feature. The wild then expands to reward you with a fully wild reel. The Midgard serpent wild symbol can appear in all three middle reels simultaneously, producing three fully wild reels.

When three or more Ravens Hugin and Mumin scatter symbols appear anywhere on the reels, the interesting Free Spin feature is activated. The more scatters you land, the more free spins you can accumulate:

The free spin feature is performed as usual, but with the added benefit that all wins come with a x3 multiplier. The Expanding Wild feature also applies here expecting you could play with 3 wild reels on every free spin.

Finally, Hall of Gods has a Pick Win feature. This will activate by accumulating 3 Thor’s Hammer symbols somewhere on the reels. With this feature, you can win 1 of 3 Progressive Jackpots.

However, use Thor’s Hammer to destroy the shield on the screen. Match 3 amounts and you will win it. You can also find 2 local jackpots and 1 progressive:

As the jackpots are progressive, the amounts that can be won continues to change. However, the average jackpot pays an average of €5.5 million and is won an average of twice a year. The smallest amount paid by the highest jackpot is €600,000, while the highest is €7.8 million which is incredible.

Certainly, Hall of Gods online slot is an excellent choice for slot games. Striking graphics, ambient and alluring soundtrack, exciting bonuses, and of course huge profit opportunities make this godly game exceptional. The sensation of this huge potential multi-million win was enough to get the gods themselves to join, and they did it in this slot. This game is compatible with most operating systems and can be played on your desktop, laptop, or smartphone. Play now at betrnk!