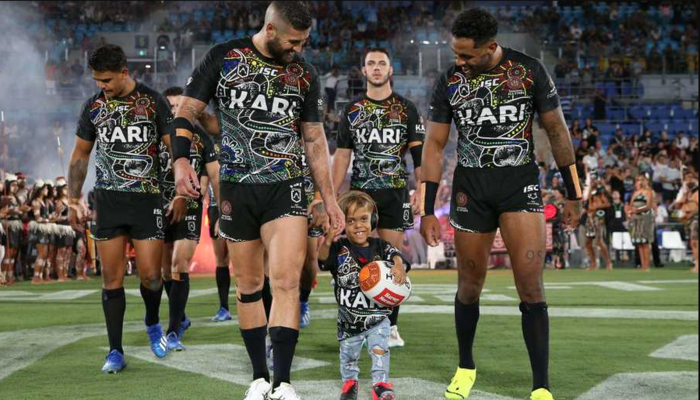 A nine-year-old boy who went viral nationwide over the heartbreaking video of him saying “he wanted to kill himself” after being bullied for his dwarfism, was applauded when he led the rugby league team in front of thousands of cheering fans.

After his clip went viral and captured hearts all over the world, Quaden Bayles, an Australian boy who dreams of becoming a professional rugby player, received an invitation to lead the Indigenous All Stars NRL team onto the field in their game in Queensland against the New Zealand Maoris on Saturday.

‘Best day of his life’

In an invitation video by the entire team posted online, fullback Rabbitoh Latrell Mitchell said, “We’ve got your back and just want to make sure that you are doing alright.”

As the teams made their entrance the crowd at the Cbus Super Stadium on the Gold Coast cheered when they saw Quaden held the match ball and Captain Joel Thompson’s hand.

He then watched the teams, compete in the game. Like the NFL, points are scored by taking the ball away from the opposing team’s goal line. The Maoris went on to defeat the Indigenous All Stars 30-16 in the game, with Bayles getting a pitchside view.